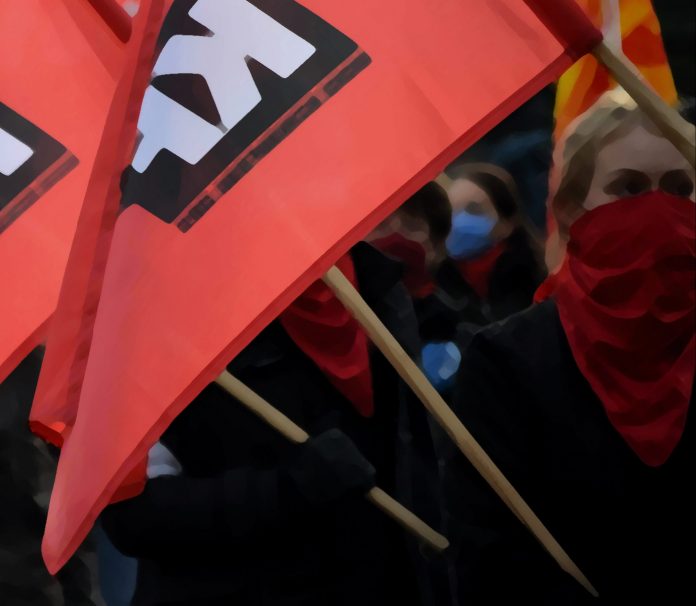 Considering the arena of ideological struggle there can be no mistake: Today, Marxism-Leninism is encircled by bourgeois theories of all sorts and forms. Particularly influential are not only fascist and openly reactionary ideological movements but increasingly also those that camouflage themselves as progressive or even revolutionary.

For the longest time communists did not do much more than making fun of these apparently progressive theories and considered them to be an exclusively academical phenomenon, although precisely these theories already had developed great impact on parts of the Political Resistance Movement and even on revolutionary organizations and certain segments of our class. Therefore, on the ideological level we have to direct our attention to the struggle against such theories and ideological elements. We do not believe this because these theories are somehow more dangerous than openly reactionary ideologies, but because oftentimes it’s much harder to draw a clear demarcation line between these bourgeois ideas on the one hand and Marxist-Leninist ideas on the other and also because we neglected them for too long.

The numerous “new” concepts and theories that fall into this field (from Bourgeois Feminism up to Critical Whiteness and Postcolonial Studies) can be summarized under the term of Postmodernism. By now they have become a dominating phenomenon among the Political Resistance Movement and are one of the most important entrance points of Subjective Idealism.

They all have in common that they reject any materialist analysis of capitalist exploitation and oppression conditions and theoretically isolate capitalist exploitation, patriarchy and racism from each other. Instead they consider these to be purely ethical questions that have to be solved individually. The materialist conception of a class society and exploitation is replaced by the idealist-moral concept of individual “privileges”. According to postmodern ideas consequently the source for social change is the individual person, not a collective subject. In their mind, less “privileges” or harsher individual oppression naturally leads to a more revolutionary individual.

The material world shaped by class struggles in Postmodernist theories is replaces by diverse subjectively experienced worlds corresponding to the different living conditions of people. The capitalist class as our enemy disappears entirely in most Postmodernist theories. The collective struggle as a class gets replaced by “identity politics”, which aim exclusively at people that share one “identity”, or to some cloudy concept of cultural struggle inside of the capitalist system. One expression of this identity politics is the one-sided fixation on changing language and thoughts, instead of the relations of production, on which today’s social order is based.

Being bourgeois-idealistic ideologies, the different theories and elements of Postmodernism ultimately play the part of concealing class contradictions and preventing the unification of the working class in its struggles. This objective function is stressed by their strict rejection of socialist revolution and Dictatorship of the Proletariat with anti-totalitarian and anti-authoritarian arguments. In this area these theories and their most exposed representatives oftentimes turn into open enemies of communism, who we have to confront directly.

Fascist ideologies are the feigned antithesis of these theories. Considering the false alternatives of ‘Postmodernist Cultural Leftists’ versus ‘Fascist Resistance against Global Elites’ we have to provide the only correct answer to Imperialism’s crisis: Socialist revolution, Dictatorship of the Proletariat and Proletarian Internationalism.

On our way to the reconstruction of a militant and revolutionary workers’ movement in Germany it is our most pressing task to fight back the influence of bourgeois and Postmodernist theories, but also to help developing and spreading revolutionary class consciousness.