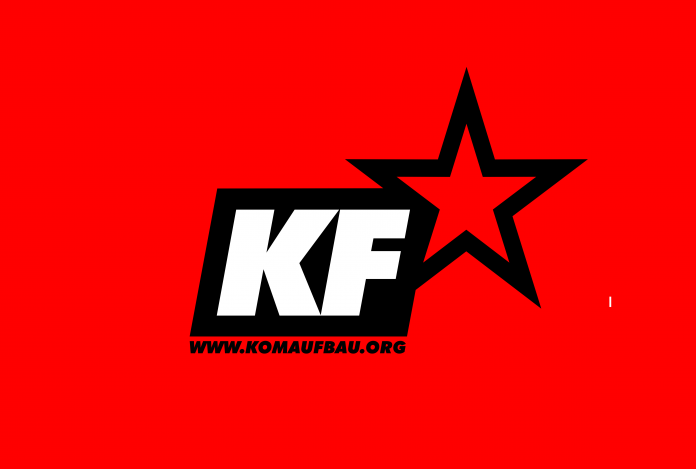 We proceed on the path that we, as women comrades, have bravely paved with our organization. We will continue this process under the name of „Kommunistische Frauen“! This is not only a success for the women comrades, who argued and debated persistently, but a gain for the whole organization. Though this, we will be enabled to furthermore develop the enormous potentials of women in the struggle.

The second congress of Kommunistischer Aufbau set the base for a successful communist work for women by adopting ideological positions to the question of women‘s liberation struggle. By establishing the KF, the work that has been done by courageous and way-leading women will be given an adequate setting and space.

A particular women‘s organization is our possibility to ensure that our positions are being heard and advocated for in our organization.

It has potential to emphasize the positions of the female comrades in the organization, which may otherwise be overheard due to the fact that every communist organization that is operating today has been established under the influence of the patriarchy. We are actively pursuing our goals, the liberation of women.

With the KF, the women are given a tool that anchors said goal in the structure of the organization and is, in notable extent, a step towards overcoming patriarchal structures in and outside of our organization. It has potential to emphasize the positions of the female comrades in the organization, which may otherwise be overheard due to the fact that every communist organization that is operating today has been established under the influence of the patriarchy.

The KF‘s founding is the direct conclusion of discussions and the consequent translation of our theory into practice. The oppressed of the world can only free themselves. They have to fight for their freedom since the oppressors will not let go of their privileges voluntarily. Karl Marx and Friedrich Engels correctly said: „The liberation of the proletariat must be the work of the proletariat“. It is the same with the women’s struggle. Who, if not women themselves, could liberate them? It will be a long struggle for the women to reach liberation in all societal aspects and we will fight this battle in alliance with the proletariat.

Through our process of socialization, women and men have unequal premises in life. If we treat these unequal premises with equal methods, we are automatically treating people unequally! Nowadays it requires special efforts to develop women into female political leaders, because this means undoing everything a woman is raised to be like. In political structures that are exclusively mixed-gender, women have to fight against their male comrades resistance when they, knowingly or unknowingly, stand in the way of developing women into leaders.

We are well aware that deed polls and resolutions don‘t change a thing unless we set up a basis that enables their implementation. Our aim as women in the struggle is never gender equality in theory, like the bourgeois state is offering to us – it is to actually overcome patriarchy and the system, that is ensuring it‘s survival, our goal is to overcome capitalism, the socialist revolution and to build communism. Only through this will we finally smash patriarchy and reach the liberation of humanity as a whole.

Being conscious of this it is for us women to fight. To lead the way in our organization, to educate us, further develop gender awareness and solidarity among women and act up against patriarchal structures and violence.

Sisterly, dedicated and brave we stand, shoulder to shoulder as impenetrable front, to fight against this system.