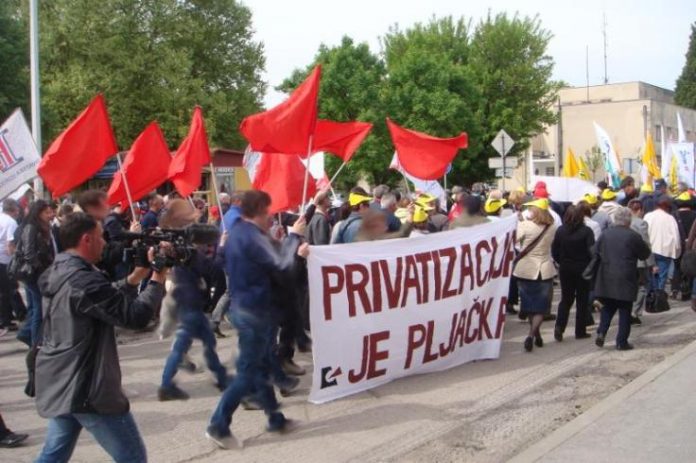 On February, 17th 2020 the organisations Red Initiative from Serbia (founded in 2002) and Red Action from Croatia (founded in 2008) announced their unification. We made an interview with the comrades on their work and the current situation in their countries.

Your organization results from the unification of two comunist
organizations from two different states. What are your reasons for this
in today’s comunist movement rather uncommon decision?
It’s true that the decision to work in two countries as a single
organisation is uncommon. But Croatia and Serbia are also not just any
two countries. They share a language and history more closely than many
other countries in Europe and were part of the same country for most of
the last century. That does not mean that there are no challenges coming
from the fact that the bourgeoisie and the state structure is different.
Sometimes even political and economic dynamics are quite different. But
the advantages are even bigger.
Not just the revolutionary movement, but even the Left in general is
extremely weak in our countries, in ideological, strategical or
organisational terms. By joining our organisations we are increasing our
strength in at least the first two segments. Having the possibility to
create a joint political line and make strategical assessments and plans
helps us solve this pressing questions for any revolutionary
organisation.
The other useful thing is solidarity across borders. As the political
systems are different and the state structures don’t cooperate closely,
the repression is not likely to hit us in both countries at the same
time. But there is also another reason that is more symbolic. By
unifying across borders we are also making a statement against social
chauvinism that once in awhile emerges here on „the Left“. People who
want to be socialists but also spread inter ethnic hatred don’t belong
to the left, and that’s what we want to show by working across borders.

Can you explain the method of unification you used as far as it is
possible for you in public?

Our organisations have had connections long before our decision to
unify, but these connections were inadequate and irregular. We also
share a common „tradition“ as both our groups were inspired by
Marxist-Leninist critique of former Yugoslavia and the life of Vlado
Dapčević. But more than that, we shared a common understanding that the
revolutionary movement needs a long-term political strategy and a strong
organisational structure.
What we lacked so far was the initiative and a model for unification.
The unification is still an ongoing process that was slowed down due to
the pandemic, but we already have most joint structures established and
functioning. We also don’t plan to establish structures for every
tactical decision. Our joint work is mostly ideological and strategical.
That is, we make a joint political line and strategy but tactical
decisions remain on the local level.
So in practice, the organisation in Serbia knows best and is free to
intervene in struggles in Serbia: whom to align with, what to support or
oppose etc. in accordance with the general political line. The same for
Croatia, of course. Then we periodically analyse these decisions through
joint bodies. In this way we have unity but don’t paralyse actions by
making every minor decision through slower joint structures.

Do you see other political or even comunist forces in the Balkans you
can possibly ally with in the future?

We are open to further unifications and hope it will eventualy happen
and contribute to the much needed strengthening of revolutionary forces.
Of course, just wishing it won’t make it happen and we shouldn’t just
formally unify groups that can’t achieve real unity in ideology or
strategy. Our hope is that our unification will also inspire other
groups and initiatives to make more effort to clarify their political
line. We don’t just mean that they choose their „international“ or
political tradition, but that they seriously think about how a
revolutionary change could be possible. That would certainly help the
development of revolutionary movement or the Left in general in the
future.
There will also always be those on the Left with which we can’t unify
because of ideological or issues of modes of struggle. But that doesn’t
mean we can’t cooperate or build solidarity or relationship of
comrades-in-arms with such actors. We certainly want to avoid mindless
sectarianism between groups that don’t present forces of any
significance by themselves. We want to look at all those democratic,
antifascist, anti-chauvinist and socialist initiatives as current or
potential allies and comrades.
That’s our stance concerning the Left in former Yugoslavia. Concerning
the broader Balkan area, we have very weak connections so far and we
will attempt to correct this. We have established regular communication
with a Greek organisation NAR on the basis of joint struggle against
(social)chauvinism in the Balkans and of course maintain comradely
relations with our Turkish/Kurdish comrades.

What are the next political, ideological and organizational goals of
your organization? (As far as can be answered publicly)
First and foremost we are still a very weak organisation and
shouldn’t fool ourselves or anybody else about this. How our recent
reorganisation will change this depends on our efforts in the near
future. As part of our unification process this year we plan to publish
a joint theoretical journal and other publications but that plans don’t
seem as important in this situation of pandemic. It should also be known
that Zagreb was hit by a large earthquake in the middle of the lock
down.
Currently, a large part of the Zagreb city centre is damaged and
thousands of houses and apartments can’t be used anymore. This all means
we are in a middle of a fierce class struggle – during a lock down.
Where will the new homeless live? Who will repair their homes? Who will
control the destroyed property? This are all the issues of struggle. At
the same time the governments in both Serbia and Croatia are planing to
„help the economy“ by pumping public money into private accounts of
capitalists and cutting already weak protections for the workers.
In Serbia, workers of a Korean company recently refused to work because
the state and owners allowed the virus to spread inside factories rather
than endanger the profits. In Croatia, as in many other places,
thousands are being fired with public money being transferred to their
employers instead to the new unemployed. At the moment we are engaged in
agitation in a situation of curfew which is very challenging.

The economical crisis has hit Croatia and Serbia paired with the
Corona crisis as it is the case in other countries. How does the working
class suffer from this situation?
As in almost any other country it is the poor and the working class
that are most hit by this pandemic. Those with smallest apartments find
it harder to „self-isolate“, have less savings and resources etc. At the
same time, the lowest paid workers now have to work more than ever, take
most risk, and have no benefits from this situation. On top of
everything they are hit by layoffs, cancellations of places to live
etc… We are constantly told that we have to be socially responsible to
stop the pandemic from spreading, but at the same time the bosses „show
us solidarity“ by endangering our life to save their private profits.
There are also some specificities in our countries. In terms of economy,
Croatia and Serbia are very different. The Serbian comprador ruling
class is trying to turn that country into a source of cheap labour for
multinationals in manufacturing and also some services. To make this
happen they are keeping workers rights and salaries at the minimum while
giving large subsidies to foreign „investors“ at the same time. During
this crisis the government is trying everything it can to keep the
factories working, endangering the workers. While workers have to work
in insecure conditions, everyone else is under a strict curfew. This
makes any type of protest impossible and will certainly serve as a
precedent for other „extraordinary measures“ against liberties later.
The economy of Croatia, on the other hand, is largely dependent on
summer tourism, which will almost certainly totally collapse. In this
situation, Croatia will face a catastrophic economic situation and at
the moment no one doubts this. Now all that remains is to struggle over
who will pay for this. The government plans to give huge subsidies to
hoteliers while slashing public services and salaries. But this isn’t
over yet, and the real response by the people will happen only after the
lock down.

How do the people of your country react to the threat of Corona and
the capitalist crisis?
It has to be said that the people have shown that they can
self-organise in this difficult situation. Solidarity initiatives
helping neighbours, whether because of the pandemic or earthquake, are
everywhere. Of course, there is also the other side, the vulture
capitalists that try to use this situation to make peoples‘ lives even
harder. The methods of struggle are very limited. Although the
restrictions are different depending on country, everywhere they are
aimed at suffocating resistance. In both Croatia and Serbia there have
been cases of police brutality because of the curfew in recent days.
Protests mostly occur making noise through the windows at certain times
of the day etc. Also, the internet has never been so important in public
life. Without it, it would be impossible to organise solidarity with
workers who refuse to work in dangerous conditions or even to know about
the level of destruction from the earthquake.

What kind of concrete international solidarity actions do you suggest
for revolutionaries in the German speaking countries, that want to
support your struggle?
A large part of foreign capital in both Croatia and Serbia is German.
Also, German foreign policy often tries to be the dominant influence not
only economically but also politically in our countries. That means that
any sort of pressure on the German companies or government from inside
Germany can help with struggles here, even when it’s just spreading
information. It is our responsibility to inform German comrades about
these struggles. We should and will do better at this in the future.
Also, several hundreds of thousands of Serbian and Croatian workers
currently work in Germany. Organising them there can have a very
positive influence on us here also. Many of them come home after some
time. Almost all of them want to follow what’s going on in their
countries of origin but perhaps didn’t come into contact with socialist
ideas yet. In a situation when a large part of our younger workforce
works abroad, we need help in reaching to them.
Finally, what the revolutionary movement in Croatia and Serbia also
needs is knowledge and skills in organisation. Revolutionary organising
is a serious thing that requires experience that is usually passed
through an organised movement. Our coutries have had a break in
revolutionary practice and now we need to find our line and discover
functioning methods from the beginning. Having good contacts with
foreign comrades can speed-up this process.