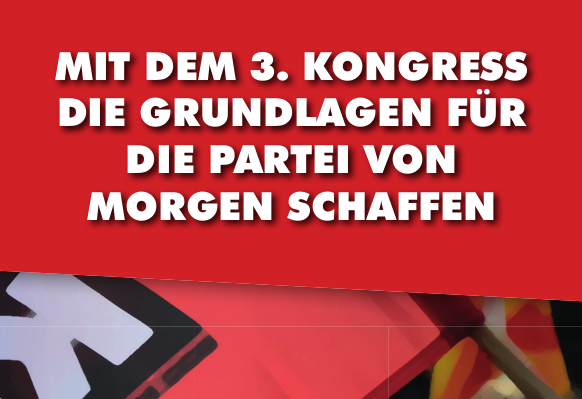 In our country as well as in our class the conditions for life and struggle for the socialist revolution have evolved and contradictions between the bourgeois and working class interests have further intensified. We as an organization have evolved since as well and through our accomplishments and mistakes collected numerous experiences in the struggle for the reconstruction of the Communist Party and the liberation of the working class.

The special intensification of class contradictions in the past years because of a very heavy worldwide economic crisis, additionally worsened by the corona pandemic, confronted us with new challenges and tasks. The ruling classes’ attempts to contain the pandemic have led to barley sustainable conditions for parts of the working class and certain parts of the petite-bourgeois class. Especially in form of mass-repression such as the introduction of a curfew, contact bans and suspension of fundamental rights, unprecedented for decades in Germany. This situation was accompanied by massive attacks on the rights and interests of our class. In this situation the working class in Germany still faces the oppression apparatus of the ruling class without a fighting Leninist organization.

It is therefore our most pressing task to change this circumstance and to contribute to the reconstruction of the Communist Party in Germany. A party of class war which develops Marxism-Leninism and applies it to our time, is deeply connected to the working class and able to lead it in oncoming struggles. A party of struggle that is able to develop the necessary communist cadres for this, build a lively and dynamic organizational network and fight for the unity of communists in Germany. A party of struggle that develops an all-around clearly shaped ideological, political and organizational line and knows to use and combine the right means of struggle at the right time.

For us communists, congresses are not a formal matter but collective moments, where we can self-critically examine and evaluate the past period, our accomplishments and mistakes and the stage of our development. Only through open and merciless critic and self-critic a communist organization is able to revolutionize itself and to orientate itself towards its upcoming tasks.

From 2nd to 4th April 2021 the delegates of our organization came together from the different regions of Germany, midst an economic crisis, the corona pandemic and the far-reaching state-issued contact and moving constrictions, and successfully held Communist Construction’s 3rd congress.

Because of the far-reaching bans and restrictions concerning public and private life, the 3rd congress had to take place under special conditions. Especially during this dynamic time it is extremely important to have a clear view onto accomplishments, mistakes and tasks as well as a collectively discussed line for the whole organization, which is uniformly carried into practice. Therefore it is all the more important that we could organize our congress under these conditions.

Now, the resolutions of the congress determine the decisive line for the period to come and the necessary steps of development as a communist organization. They will be the measure for the organization’s success and development.

Development of the Organization

The work of our organization has grown wider in all areas since the last congress. To ensure that the organization doesn’t only grow in quantity, through establishing new areas of work and work in more cities and regions, but also further develops the quality of work, structures and cadres, the congress passed important resolutions to raise the organizational level systematically.

Development of the Cadres

One topic the congress put emphasis on was the discussion about the necessity of the development of cadres. Especially in the imperialist core, where the level of class conflicts is relatively low and the force of integration into the bourgeois system is particularly strong, a solution to this challenge needs special effort. Particuclarly concrete efforts and concepts for the development and education of cadres are necessary, which are going to be focal points of the coming period.

The lack of cadres with a strong class consciousness, who are experienced politically, ideologically and organizationally and trained in class struggle, is one of the communist movement’s biggest problems in Germany. In the coming period, it’s necessary for us to find methods and ways to develop the needed cadres for the next step of development and to come closer that way to the creation of professional cadres of a new type. A special emphasis will have to be on the specific revolutionary development of personality, with which we will have to overcome the bourgeios seperation of private and political life. Additionally, acquiring an advanced awareness for gender and our enemies, the profound study of Marxism-Leninism and its creative application are needed too.

The congress dealt with the development of the communist youth and women’s organization as well and evaluated their development for the past period critically. Both organizations were able to develop in a positive way since the last congress.

Especially the youth organization has become a vivid tool for the organization of young communists. In it, the revolutionary youth can learn the communist working method and develop into the future cadres of our organization. In the coming period it is still the goal to develop cadres from the ranks of the youth organization who can lead the youth organization by themselves and therefore pave the way for their organizational independence. In addition, there is the important task of putting the general analysis and ideological positions in concrete terms and using them concerning the youth’s situation. This is also true, among other things, for the concrete application of the results of our class analysis to the life and social standing of the youth.

The women’s organization was able to work out a series of important ideological positions and has become an important tool in the struggle against the patriarchy and for the development of our women comrades. In the future, it has to also build the potential for an independent leadership Moreover, there are important ideological works on the agenda of the women’s organization, topics such as gender, sexuality, prostitution and pornography. Here it is going to be about working out Marxist-Leninist positions on the one hand and on the other hand about drawing the necessary line to idealist postmodern positions. Parallel to that, the development of communist LGBTI+ work is on the agenda.

In the past time period we as an organization worked out our own positions to a series of ideological questions and with that further developed our ideological line as a whole. After the fundamental work for our class analysis, which we published in multiple issues of our theoretical paper, the coming time is going to be about proceeding from the analysis and conclusions made there and starting to develop a strategey for revolution and a communist program for Germany.

Additionally, the organization faces the task of working out an analysis of the GDR. Especially its social character, its development and its effect on the working class in Germany today need to be analyzed and conclusions to be drawn from it. At the same time, it is going to be a task to strengthen the organization in the fight against different kinds of anti-communism. This contains the struggle against idealistic postmodern theories as well as attacks under the guise of “anti-totalitarianism” and reformist and revisionist attacks on Marxism-Leninism.

In the field of agitation and propaganda, the coming phase is going to be about doing justice to the increasing interest in our organization and in our mass work, and to professionalize and expand our ideological and political positions and materials.

In addition to that further development of our agitation and propaganda and the general expansion of our communist appearance and direct mass propaganda is necessary. For this, fitting methods have to be developed, also in form of art and culture.

The congress has underlined the segmentation and the division of the working class as one of the biggest obstacles for the creation of a unified revolutionary and class conscious workers’ movement. Responsible for this segmentation and division are subjective and objective factors. On the one hand they are based onthe continuing differentiation of our class because of the development of technology and production. On the other hand they are further intensified and pushed by idealistic theories like postmodernism. These theories, which are especially well received in the Political Resistance Movement, divide our class based on origin, gender, communities and “identities”.

As communists we have to overcome this division while organizing the working class and build a unified class conscious workers’ movement that way, which organizes itself based on its exploited position in capitalism and fights together to overcome this system and to build up socialism. To reach this goal, direct mass work inside the working class has to be organized under a politically, ideologically and organizationally unified roof in the future. This way, we can organize workers on the one side based on their special living conditions and problems and on the other side bring these struggles together in a unified workers’ movement. At the same time, we can use such a union to centrally organize areas of our mass work which have not been permanently worked on yet, such as among LGBTI+ people or bringing labor activists together.

The increased attacks of the ruling class and its instruments of repression put the question of reacting to those attacks more and more urgently on our agenda. The revolutionary and communist movement in Germany is still far away from being able to resist permanently against the state and its connected criminal and fascist gangs. Therefore, in the political practice it is going to be about tackling the question of collective self-defense, the ability to react and take action and to further develop it.

The congress dealt with a whole series of more topics and passed corresponding resolutions, although we won’t publish them here.

Together with this declaration you will find five political resolutions which the congress passed and are immediately directed at the interested public. The resolution about “The political Situation and our Tasks” sums up our views and analysis of the current political situation in Germany and the world and names our current tasks in class struggle.

The resolution “Building the Communist Party means creating Communist Cadres!” sums up the most urgent tasks of our organization in the field of developing cadres and at the same time takes a clear stance on the necessary development of the understanding of cadres and organizations in the communist movement in Germany.

In our resolution “For the Construction of a revolutionary and militant Workers’ Movement!” we position ourselves in a detailed way regarding our coming tasks for the construction of a unified workers’ movement immersed in class struggle, beyond reformism, “social partnership” and idealistic lines of devision.

The resolution “Fighting actively against bourgeois Ideology on all Levels!” is a declaration of war to the bourgeois-idealistic theories of postmodernism, which especially stand in the way of the development of a revolutionary class consciousness today.

The resolution “Our international Tasks” at the end names our internationalist responsibility and is at the same time a call to our comrades all over the world to press ahead with the international level of the connection of class struggles and to expand the practical international discussion, connection and organization of revolutionaries and communists. For this, especially real relationships beyond the borders of countries have to be in the center of our efforts.