Exactly five years ago, on the first of May 2014 our organization, the communist construction (Kommunistischer Aufbau), had its first public appearance. With our publication ‚Why Communist Construction‘ we went out on the streets on the International Workers Day and started our journey. Five years ago we wrote: ‘Every thought about a revolution in Germany in the 21st century stays an utopia without a flexible, lively, focused and unified revolutionary organization. We need a communist party – not in the sense of a bourgeois parliamentary party, but in the sense of a revolutionary combat organization.‘

Even five years later nothing changed in regards to this statement and the need for the construction of a revolutionary combat organization. The working class still has no Leninist organization to fight the repressive state of the capitalists.

It is and stays or mission to change this situation in out favor. It stays our mission to build a combat organization, which is deeply rooted in the working class; which develops Marxism-Leninism further and elevates it to fit the present; which uses and combines the right kind of weapons at the right time; which is able to develop the needed cadres; which develops a unified ideological, political and organizational line.

In the last five years we made important steps on the way of developing a communist construction organization. We made errors and we had great successes. We lost comrades and we won new ones. We have developed from a little communist circle to an organization with an unified concept that follows Marxism-Leninism.

In the past years besides the construction of our organization and the expansion to other cities and regions we have founded our own communist youth organization. We created unified mass-organizations and a mass-press.

In our theoretical journal in the past years we worked on fundamental ideological topics like fascism and antifascist counter-strategy, communist mass-work, development of cadres, Islamic fundamentalism, revisionism in the UdSSR, communist youth organization, parliamentarism and we made first steps to a class-analysis. Last year we have revised our booklet about the construction of the communist party and adjusted it to our today‘s understanding.

In spite of these developments we remain behind the objective necessities quantitatively and qualitatively. The made steps took us further and strengthened us as an organization, but there are even bigger challenges to come.

In the coming phase it will also be about developing the organization quantitatively and qualitatively, fighting for the unity of communists, safeguarding our achieved successes and making new advances. 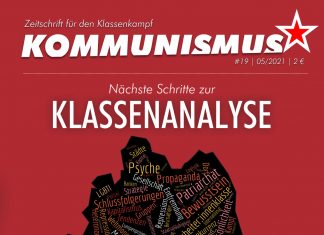