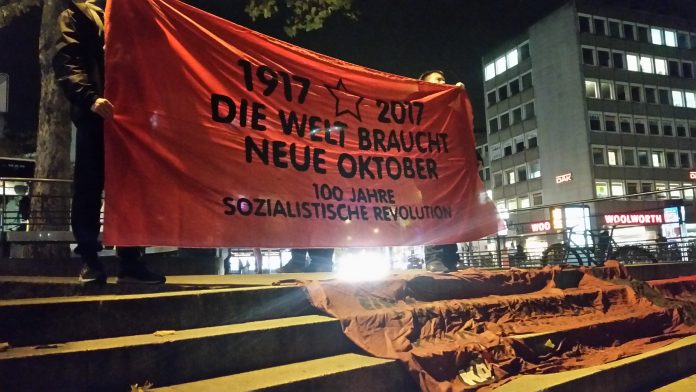 The October Revolution raises one central question: ‚How could the working class lead by the Bolshevik conquer political power?‘

The answer: The Bolshevik fought the revolutionary class war according to a consistent political-military overall strategy.

1st lesson: Innovation as a strategical element – Stop the search for cooking recipes

As reality is constantly changing we cannot stay in the past. There are no coking recipes. We have to re-invent ourselves over and over again – a fact that is hard to accept for the bourgeois mind.

When it comes to think about a revolutionary strategy that means to understand that there are no schemes that will show us the way. Future is open. Social contradictions push the development into new directions, that do not follow any historical analogy. Uprising, partisans, people‘s war, urban guerrilla – whoever tries to reduce these concrete experiences of class war to simple manuals is sure to fail.

October revolution is a turning point in a unified revolutionary process. It lasts as long as 20 years from about 1901, when Lenin started to develop and apply the Bolshevik revolutionary strategy in ‚What to do?‘ till the year 1920, when the war against the counter-revolution was won at long last.

Can the seizure of power through the uprising be separated from the years of preparations before? Even if there were no Moscow Uprising 1905, no Democratic Revolution in 1917‘s February, this would be impossible. It would be as absurd as to claim that a football match only lasted some minutes because it was decided by a penalty shootout.

In both cases one cannot separate the outcome from the whole course of the match respectively the war. This dialectical approach is to be defended against bourgeois thinking.

Concerning the Bolshevik‘s revolutionary strategy neither its political aspects can be separated from its military ones nor can the military aspect be reduced to the decisive battle, the actual uprising in October 1917.

A social revolution only takes place, when a crisis has ripened in the whole society. In 1917 this was the case in Russia, as the‚ left revolutionary government‘ had lost all its credit eight months after the Tsar‘s downfall. The choice of the right moment for the decisive charge is one of the trickiest questions of revolutionary strategy. This problem is connected to the term ‚uprising‘. Uprising sounds heroic. Uprising means civil war.

Yet how shall we evaluate an uprising, that does not satisfy the audience‘s lust for blood?

Many criticize October Revolution for being only a well-organized coup d‘etat executed by some conspirators. Counterquestion: What exactly is to be criticized about seizing power with a minimal blood shed in November 1917?

The bourgeois ‚coup‘ argument turns against its creators. It only proves that the Bolshevik had mastered the art of revolutionary warfare perfectly. Using the dialectic as his scientific method in Autumn 1917 Lenin could determine correctly a narrow time window of a few days and hence wrote history.

4th lesson: Against the Stages theory

Lenin stressed over and over again that the partisan‘s war is an indispensable means. For him ‚armed struggle‘ is not individual terror or falling into anarchism. In Lenin‘s conception it is the necessary preparation of a mass basis for the uprising and the forging of military knowledge and cadres of both party and masses.

The mainstream of the Marxist-Leninist movement nowadays defends the exact opposite: A chronological stages theory that separates on the level of strategy the political work in a first phase from the – more or less inevitable and regrettable – second, brief military phase, in which power is seized through an ‚uprising‘.

Early Lenin developed the ‚party of a new type‘ as a revolutionary combat organization. It leads the Proletariat‘s class war politically and militarily by uniting with the working class using a great variety of mass organizations. The Leninist revolutionary strategy consists in forging a political-military combat organization, merge it with the proletarian masses and thereby draw broader and broader sectors of the oppressed classes into class war. While the revolutionary side accumulates power and grows in a long process, the enemy and its state apparatus decay. Eventually the proletariat is strong enough that it can charge in a favorable instant and seize political power.

6th lesson: Revolution is made by the masses – it is not an uprising of communists

This is why the Bolshevik directed a major part of their forces to the mass agitation, which was in a way decisive for the strength measurement. Not for an instant they forgot the all-decisive importance of the masses. Hence, with their restless mass agitation – at that time still without internet and mass media – they added a new element to their strategy.

Leadership is an indispensable function in every political movement. It emerges, when a problem urges to be solved. Finding solutions is something creative, therefore some people due to their character, their conscience etc. will take up leadership. Humankind‘s history proves that in struggle it makes sense to give leadership to the most skilled fellows.

The Bolshevik‘s revolutionary strategy is a unified overall plan, that was put into practice consistently with most diverse means on different levels.

The Bolshevik under Lenin‘s guidance where the first ones in human history, that wrested strategy, which was historically developed by militaries, from war and applied it to (revolutionary) politics.

Revolutionary class war is an art, which follows the laws of war, although this class war is to be fought with political, psychological etc. means and with the organized, armed force of military forces in a consistent way.

If strategy can be defined as the art of creating power, the revolutionary art is to win despite one‘s inferiority!

Opportunism raises metaphysical objectivism against this. It sticks to power ratios it believes to be static. Yet, power ratios normally will be unfavorable for us even on the eve of the uprising. It was Clausewitz who already phrased a central principle of war science, according to which great sucess in war can only be captured by taking great risks.

Sober mathematical measuring of the power ratio will (nearly) always come to the result of our inferiority when it comes to real politics. Hence, we have to rely on the dynamics of the situation, on forces that will be ‚created‘ through determined acting. These forces are a possibility in the midst of a social crisis but have to be turned into reality by our initiative.

After 100 years of class struggle revolution as much as counter-revolution tend to merge the political, the military, the psychological and the communication trying to affect moral on both struggling sides into a consistent overall strategy.

What we have to learn from October Revolution is to embrace the philosophical truth that a revolutionary strategy is a unified piece of art. We must not divide the political ‚art of creating power‘ into isolated stages and separated areas.

More practically orientated comrades may ask ‚what does that mean in concrete?‘ What does our strategy for a social revolution in a country like Germany look like?

We won‘t find an answer to this question in any book. Books only give us the tools, the general principles of strategy.

What the path to our goal looks like under current conditions has to be unraveled in our own practice – as Lenin and the Bolshevik showed us. We want to close with a dialectical mnemotechnic verse that may serve us as orientation on the way:

‚Revolutionary politics means to wage a war, always and everywhere – even if we don‘t fire a single shot in our entire life!‘