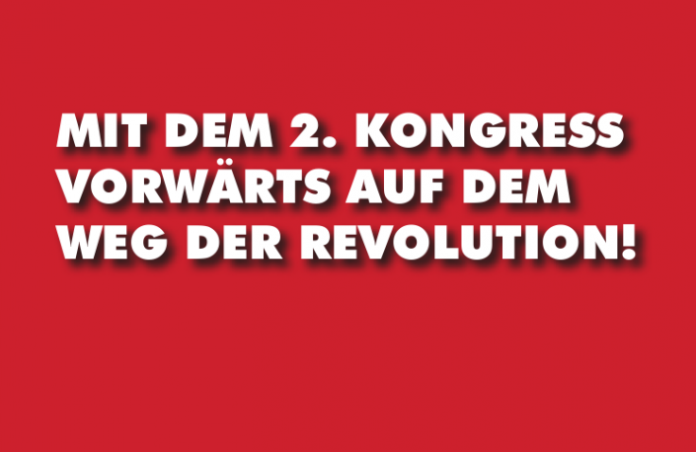 From the 30. December 2018 till the 1. January 2019 the delegates of the organization from all the different regions of Germany have met and successfully held the 2. Congress of the Communist Construction (Kommunistischer Aufbau).

The concrete task, that this congress had to accomplish for the development of the organization, was summarized in the opening speech as follows: “Todays time is about making the right steps at the right time. It is about developing our organization higher and further on all sides. To carry on this path successfully and united, courage and trust is needed. Courage to leave the old ways behind and find new ones. Trust to start out together and determined and also arrive at the goal.”

On this day 100 years after the historical founding-congress of the Communist Party of Germany (Kommunistische Partei Deutschlands – KPD) we have come together after intense preparation to evaluate the development of the organization since its founding in 2014 and especially since the last two or three years and to set the organization and its ideological, political and organizational line for the fulfillment of the mission that the future holds. The decision for the historic date is meant as incentive to take upon our historic responsibility and at the same time shows us the gigantic mission that is the reconstruction of the Communist Party of Germany.

The congress took a look at the past and the errors and successes of the organization. At the same time a huge degree of solidarity and unity in principles could be seen in the many discussions. Through enormous discipline and seriousness as well as active participation of all delegates the present comrades took upon their responsibility for the organization.

Between the founding-congress and the following congress there has been a series of meetings, which were crucial for the development of the organization and its principles and organizational line. These conferences were important steps, that were necessary for arriving at the place we are today. The founding-congress in the year 2014 and the successfully held 2. Congress of the Communist Construction (Kommunistischer Aufbau) stand out in this series of important events in regards to their broad content and the resolutions quantitatively and qualitatively. With the now successfully realized congress the conditions are made to open a new chapter in the development of the organization.

After five years it was necessary to modify the statute as well as the Programmatic Self-understanding to fit the developments of the organization. The organization had already for some time surpassed the state of these two documents.

At the same time the congress has taken into account the ideological development of the organization and has replaced the old Programmatic Self-understanding with a fundamental rework. Until then principal questions about the construction of a party and the unity of communists were the main focus, which now has been amended by further analyses and positions of the organization. Now the 2018 published first results of the class-analysis as well as the understanding of activating, educating and organizing the working-class through organizations of the masses are found in the programmatic document. It is now not solely or mainly aimed at other communist structures or persons, rather directly at the most progressive elements of our class.

The congress also worked on questions of the youth organization and the topic of women’s liberation struggle. On both fields far-reaching organizational and ideological decisions were made, which will make the organization able to achieve its full potential in organizing women and the youth.

The congress decided after a long ideological discussion to adopt new positions in regards to the women’s liberation struggle as the fundamental line of the organization. This step was necessary to leave behind the missing actuality of our ideology on this matter and to set the basis for a successful communist women’s work.

In this context the congress decided the admission of comrade Ivana Hoffmann, who was made immortal in Rojava, as a member of honor of the organization. She shall be seen as a role model for all comrades for her ideological, political and organizational development. She shall be treated in a organizational way as a role model for the formation of conscientious and self-sacrificing communist cadres, who a deeply rooted in the masses. Especially for the youth and the women of our organization she has already become this in a natural way.

The congress underlined the necessity of systematic formation of cadres. It is and will be a problem to solve for the organization and the communist movement in Germany as a whole to form communist cadres. These cadres not only have to have a broad ideological education, they also need a developed revolutionary class-consciousness as well as clear organizational and political methods of organizing the working-class and revolutionary class-struggle. Also the systematic review of the history of the German communist and working-class movement is a task for the following period. This has to be an investigation from the foundation of the KPD, the class struggle in the Weimar Republic, the early Federal Republic of Germany, the ‘68 Movement and the K-Groups, the experiences in the GDR up until the history of our own organization. This systematic work represents an important basis to avoid the mistakes made by our movement in the past and to actually use the objectively available experiences in our own work.

In Germany there is a long tradition of spontaneous and actionistical revolutionary youth groups and cliques, as well as bureaucratic discussion circles, that try to organize the class ‘from the outside’ with page-long pamphlets. To advance on the way of constructing a communist party we need to overcome their weaknesses. We need to develop a political and practical reflex-ability, which lets us react flexibly on spontaneous developments and sets into motion the organized masses close to us.

On the other side there is the need for permanent work in all fields where our class regularly comes together. This naturally includes the workplace, the school and the university, but also the district, the square and the association. Thereby it is important to learn from historic experiences and to modify methods and concepts to fit the present times. Especially the developments of the mass-media and ways of communication and the deep changes in the organization of production have to be taken into account. In the coming period it is necessary to understand and work out these fields systematically.

Another field in revolutionary work in Germany, which is lagging behind in the communist and the working class movement, as well as our organization and which has been forgotten to an extend is the whole topic of revolutionary and communist art and culture. Even though we have made first steps in the near past its significance for class struggle should not be underestimated. Here also the already started work has to be systematized and developed continuously.

The resolution about ‘the political situation and our tasks’ briefly summarizes our views and analyses in regards to the present political situation in Germany and on the world and names our present tasks in class struggle. In the resolution ‘developing communist women’s work’ and ‘fighting violence against women organized and united!’ we name the most important tasks in regards to the struggle for women’s liberation and lay out our views on the topic.

With the resolution ‘we have no time to lose: Join the construction of the communist party!’ we address all people, that want to make a contribution in the construction of the communist party in Germany. We proclaim that the unity of communist on an ideological, political and organizational level is an problem left to solve in Germany and call on all revolutionaries of all different political and ideological tendencies to stand together in the concrete struggle against our common enemy.